JULY 4TH WEEKEND is always a big one at the beach, and this year many are making a four-day weekend of it.  Two big fireworks shows are planned this year.  Stone Harbor will put on its fireworks display Sunday, July 2nd at the 96th Street beach at dusk.  Avalon’s fireworks display will take place on Tuesday, July 4th on the 30th Street beach at dusk.  Numerous other activities are planned all weekend, with some beginning as early as Thursday evening.  See below for a list of events!

TURTLE TIME!  Yes, it’s still the season for diamondback terrapin turtles to cross local roads as they seek higher ground on which to lay eggs.  Turtle barriers along some roadways help reduce the number of turtles killed by vehicles, but numerous deaths still occur.  Volunteers are often able to harvest unhatched eggs, incubate them, and then release the baby turtles once they are large enough to survive in the wild.  You can help out by slowing down and avoiding turtles crossing the road.  If you stop to help a turtle across the road, carefully move it in the direction it was going, and be sure to watch out for other vehicle traffic. 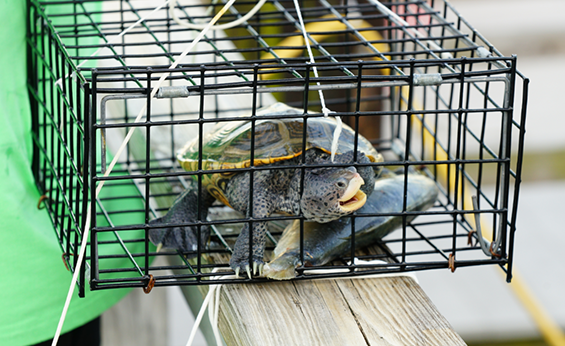 Turtles are everywhere at this time of year—including kids’ crab traps!  This one stopped to snack on a bunker, commonly used as bait for crabs.  The turtle was immediately released unharmed.

GOOD FISHING REPORTS continue to come in.  Flounder continue to be caught in large numbers in the bays and inlets, with many sizable keepers being reported.  Offshore tuna action has started with yellowfin tuna being caught in the canyons and some inshore lumps.  Surf fishermen have also reported good action on beaches and jetties.

LOCAL FIREFIGHTERS had a busy Sunday afternoon.  A car fire broke out in Avalon on 19th Street, destroying the car and damaging an adjacent home.  In Wildwood Crest a Bayfront home caught fire, and flames spread to the home next door.  Both fires sent plumes of black smoke into the air, and were visible up and down the beach.

IMAGINE HOW MUCH FUN IT WOULD BE to have your own place at the shore!  Make memories—every weekend!  If you’re ready to begin your search for the perfect shore home, call or email me today.  Whether you’re looking for a getaway condo, a rental property, or your own palace on the beach, I’ll listen to your needs and help you find the right place!

This one-of-a-kind 7 bedroom, 4,800 sq. ft. home with wrap-around decks, amazing pool and cabana area, and ocean views, sits on a huge 100′ x 110′ lot. With the added plus of being located in one of the nicest sections of Stone Harbor, this home is a winner!

This corner unit in Cornell Harbor has amazing water views, decks with privacy, and a garage. Enjoy the pool and use your boat at your own 10′ x 28′ boat slip. This 3-story unit is an opportunity at $879,900.

Have you been thinking about your dream bayfront condo with unobstructed sunset and wetlands views? This 3-bedroom unit has been renovated and decorated to perfection and includes a boat slip. This is a must-see opportunity!

Enjoy the stunning channel and sunset view from this beautiful move-in ready home. With a pool, third floor observation deck, and walking distance to town, this property is a winner.

A lifelong sailing enthusiast and Georgetown University graduate in business administration, Doug has an extensive international marketing and corporate software sales background. In addition, he was a past Homeowners Association President for 6 consecutive years. Doug is a member of the Yacht Club of Stone Harbor and a past Trustee of the Realty Owners Association of Stone Harbor. Read more about Doug including testimonials…